Extend your holiday and join us in Oberammergau for an unforgettable once-a-decade performance! 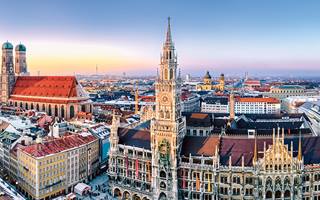 View Gallery (5)
The community of Oberammergau in Germany, will perform the Passion Play for the 42nd time. We are inviting you to be part of this unforgettable experience which only occurs once every 10 years.

In 1633, the residents of Oberammergau vowed that if they were spared from the bubonic plague sweeping the region, they would produce a play for all time depicting the life and death of Jesus.

The first play was performed in 1634, and it has run ever since - for 380 years. It’s the world’s longest-running play and widely regarded as the most important Passion Play in the world.

Combine your cruise with our handcrafted land tour that includes tickets to the Passion Play Performance and stays and tours in Vienna, Salzburg, Innsbruck, Oberammergau and Munich.

You'll also enjoy fully escorted handpicked tours in Vienna, Salzburg, Innsburg and Munich as well as transport to and from Oberammergau and all tipping and gratuities.

Alpine Discoveries & Oberammergau
Vienna to Munich
On this 7 day tour from Vienna to Munich, enjoy a walking tour in Salzburg, visit the Berisel Ski Jump in Innsbruck & attend a performance in Oberammergau.
7 day
From (AUD)
$ 5,895
Discover
Call our Experts on 138 128 to speak to a Scenic Luxury Travel Expert to help plan your next trip or
Enquire now