10 reasons why Norfolk Island should be your next “overseas” holiday

Australia’s rich and diverse scenery – from snow-capped mountains to arid outback landscapes, unique wildlife, and wide range of enriching experiences, has ensured that you don’t have to travel far to indulge in an exotic holiday.
So, if you love travelling to remote islands that are surrounded by lush pine trees, golden beaches, crystal waters and are blissfully away from the crowds, then you are sure to love Norfolk Island.
Norfolk Island provides you with the unique opportunity to holiday overseas with only a short flight from the mainland.
Scenic’s 8 Day Historic Norfolk Island itinerary explores the quaint island where time seems to have stopped at a simpler, more relaxed pace. Travelling to this beautiful island will reveal to you all the hidden facets of this jewel that offers so many contrasts.
Here are the top 10 reasons why you should plan a handcrafted small group journey to Norfolk Island:

From the moment you arrive at Norfolk Island, the warm welcome of the locals will strike you as you are greeted with broad smiles and friendly waves. Scenic gives you the opportunity to explore the local hospitality even more deeply via an exclusive Scenic Enrich - progressive dinner experience. Learn all about the life of the islanders and their past, from three different families who will welcome you into their homes for each different course.

The intriguing past of Norfolk Island, spanning over six centuries, has led to the island developing its own unique language known as Norfuk or Norf'k. This language is a fascinating mix of English and Tahitian, created by the Bounty mutineers and their Tahitian wives, and you will have the chance to learn a few words of it through our exclusive Scenic Enrich experience. The perfect addition to your “overseas” holiday. 3. Driving around is a delight

The Norfolk Island is only 34.6 km2 in size. This means, you can drive from coast to coast in under 30 minutes. Our Scenic Freechoice activities give you the opportunity to self-drive and explore Norfolk Island’s rustic roads on your own. Here are some things to keep in mind though – there are no traffic lights; there’s only one roundabout in the entire island; waving politely at passing cars is recommended (it’s called the Norfolk wave); and keep a look out for meandering cows, they have the right of way.

While shimmering beaches and turquoise waters surround the entire island, Emily Bay is the perfect place to lounge and soak up the sun. Being a sheltered reef lagoon, it is also a swimming and snorkelling paradise. 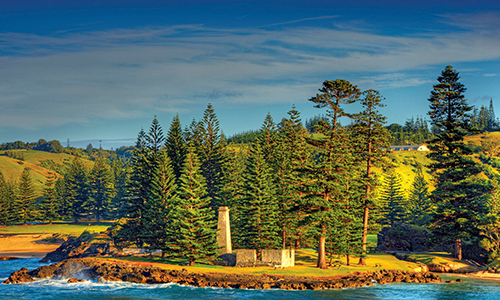 Norfolk Island’s history is long and colourful. First inhabited and abandoned by Polynesian settlers in the middle ages, the island was rediscovered by Captain James Cook and settled by the British in the 18th century. The island was a British penal colony from 1788 to 1814, and again from 1825 to 1855. The remnants of this harsh past can be seen at the World Heritage-listed convict site of Kingston. Scenic’s expert Tour Director and guides will take you on an enlightening journey through the convict gaol ruins and regale you with stories of its past inhabitants. You’ll also discover the current uses of the pier buildings and other historic landmarks in the area. 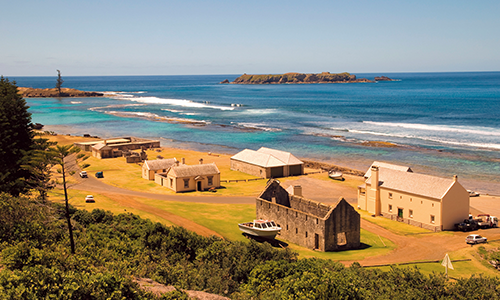 6. The Bounty mutineer past

To find out what happened to Norfolk Island after the British left in the mid-19th century, make your way to Cyclorama to view one of the most incredible paintings you’ve ever seen. As you step inside the cylindrical room, you’ll be greeted by the sound of seagulls and lapping waves and everything that recreates the feeling of being on board a Royal Navy vessel. Herein lies the storyline of the infamous mutiny on HMS Bounty. Take a walk along the incredible 360° panoramic painting that traces the history of the Norfolk Island population who are descendants of the Bounty mutineers.
With Scenic, you will also see Norfolk Island’s turbulent history on stage during the engaging and entertaining courtroom drama, ‘Trial of Fifteen.’ 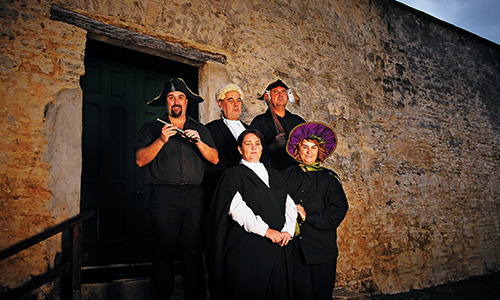 7. The relics of HMS Sirius

The flagship of the First Fleet, HMS Sirius was sent to Norfolk Island with provisions for the penal settlement that was running desperately low on supplies. However, on 19 March 1790, the ship was wrecked off the reef at Slaughter Bay on Norfolk Island, stranding the crew for a year. Scenic will take you on a guided tour of Maritime Museum to view the fascinating remnants of the wreckage and hear the story of its ill-fated voyage.

An overseas holiday would not be complete without some delicious wine tasting at a local vineyard. An included Scenic Freechoice activity, will give you the chance to visit the boutique Two Chimneys vineyard to taste locally made Chardonnay, Semillon, Verdelho, Merlot, and Chambourcin. With Scenic Freechoice, you can take a tour of a local goat farm and learn about their goat cheese making process. Enjoy a beautiful tasting platter of home-grown cheese, including locally made guava jelly and experience the paddock to plate way of life that the locals swear by.

10. Visit the home of a world-famous author

Australian born author Colleen McCullough is well-known for her much-loved books, The Thorn Birds and The Ladies of Missalonghi. In 1979, the writer moved to Norfolk Island and made it her permanent base. As an exclusive Scenic Enrich, you will have the chance to walk through the famous novelist’s quirky colonial home and see her priceless possessions. From the typewriter that churned out many a bestseller, to the photograph of her beloved cat George, enjoy a sneak peek into the writer’s vibrant life.

Join TV presenter David Whitehill as he explores the unique history, culture, and customs of Norfolk Island in this latest informative video and hear from a Scenic Tour Director about her beloved island.