Penguins and their flying neighbours

While penguins are the cute, small, drawcards of an Antarctic voyage they are far from the only birds in this part of the world. Seeing various species of penguins going about their lives in their snowy colonies is certainly a highlight of every voyage.
There are 17 species of penguins around the world. Which ones you’ll see depends on where you go in Antarctica. Around the Antarctic Peninsula you’ll see lots of gentoo penguin colonies – they are instantly recognisable by the jaunty white flashes behind their eyes. You’re likely to encounter chinstrap penguins, too. They are feisty little guys who look like they are wearing black helmets, complete with the black “strap” around their necks that gives them their name. The third of the brushtail penguins of the peninsula are the Adelies. With flat heads and simple monochromatic feathers they look like the prototype model of a basic penguin.
Then there’s the sub-Antarctic penguins. Around Patagonia you find Magellanic penguins with black and white head banding and a brash call that also gives them the name of jackass penguins. In the Falklands and South Georgia the large and beautiful king penguin is the most spectacular. Rockhoppers not only look eccentric with tufts of orange feathers above their eyes but live up to their name by preferring to crash onto surf rocks rather than land on the sandy beach next door. Macaroni penguin have impressive yellow crests like Yankee Doodle Dandy who “stuck a feather in his cap and called it macaroni”.
Just sometimes you may find a majestic emperor penguin on an iceberg far from any emperor colony. This is likely to be a young bird out backpacking its way through puberty.
“There’s no such thing as a seagull,” is the lament of serious birders. Rather there are various types of gulls. In Antarctica you’ll see kelp gulls that are huge compared to Australia’s silver gulls. Those and flocks of cape petrels with their splotchy black and white colouring, are your constant companions throughout the voyage.
Penguin colonies attract marauding skuas plotting to steal an egg or make off with an incautious young chick. At some colonies, particularly in South Georgia, they’ll be joined by giant petrels with the same intentions.

A look back at sightings from Scenic Eclipse's inaugural season 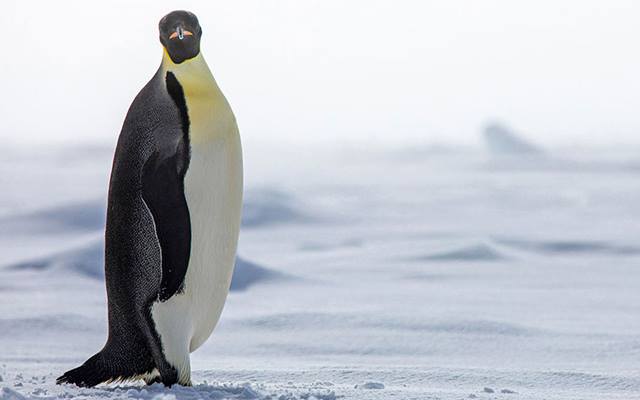 View Gallery (15)
The sea days to and from Antarctica can be a wildlife extravaganza. Albatross and whales are the main drawcards. Even your first morning at sea is likely to reveal the elegant wandering albatross, the world’s largest flying bird, as well as giant petrels and, with luck, grey-headed or light-mantled albatross and almost certainly black-browed albatross. Prions and petrels abound on the open water, too. The smallest birds you’ll see in Antarctica are the storm petrels elegantly flitting above the waves delicately picking food off the water.
At one point in crossing the Drake Passage you’ll pass through the Antarctic Convergence where you move from the South Atlantic Ocean to the much-colder Southern Ocean and this sometimes misty area can provide some great sightings.
Of course, there has to be a challenge and, being Antarctica, it’s identifying which white bird is which.
When the weather gets rough it’s the best chance to see one of the most beautiful birds in the world: the pure white snow petrel. Sometimes you just see the black of their eyes and feet against an iceberg backdrop. In “The Worst Journey in the World” Apsley Cherry-Garrard, Antarctica’s most lyrical explorer, wrote that they are “nearest to the fairies than anything else on earth”. If there’s any ice around keep your eyes peeled.
Perversely, the other all-white bird in Antarctica is one that only a mother could love. Snowy sheathbills, the only bird in Antarctica without webbed feet, are mostly found scavenging around the colony. Unkind expeditioners have been known to say that they rather resemble what would be the world’s ugliest chicken.
Nor does their job description disappoint. Without webbed feet they have to fly non-stop from South America to Antarctica at the start of summer. Once there, their main task is eating penguin poo around the penguin colonies. Well, you take work where you can get it.

The Antarctic Peninsula is home to an abundance of wildlife with vast colonies of penguins, seals and pods of whales.