The Smoke that Thunders

The Discovery of Victoria Falls by David Livingstone
One of the world’s most spectacular waterfalls is Victoria Falls. Located on the Zambezi River at the border between Zambia and Zimbabwe in southern Africa, it’s easy to see why this enormous curtain of falling water is regarded as one of the Seven Wonders of the World. With water plummeting 100 metres, spanning a width of one and a half kilometres, its magnificent force and incredible beauty draws more than one million tourists to its shores every year.
We take a step back in time to discover how Victoria Falls was first discovered…

The year was 1840, and the Scottish missionary and explorer David Livingstone first arrived in Cape Town, for a posting at Kuruman on the edge of the Kalahari Desert. Charged with spreading the Christian faith and freeing people from slavery, Livingstone was inspired to further explore the unknown lands of Africa.

Wanting to find a route from the Upper Zambezi to the Atlantic coastline to introduce Christianity to Africa, Livingstone began a four year journey starting in 1852. During his travels, he had heard tales of a great waterfall downstream on the Zambezi, which the locals called “Mosei oa-Tunya”, translated as ‘the smoke that thunders’. With a small group of Makololo tribesman from Namibia, Livingstone went in search of it.

In October 1855, he was making his way along the Zambezi River by canoe, when he heard a distant roar and what looked like smoke rising up into the sky. This ‘smoke’ actually was the mist from the falls. Continuing to paddle down the river, Livingstone and his guides reached one of the small islands on the lip of the falls, what is now known as Livingstone Island.

It was here on 17 November 1855 that Livingstone first witnessed the mighty “Mosei oa-Tunya”. Overcome with such emotion at this great spectacle, he named the falls in honour of the British Queen, Victoria, describing the sight, “It has never been seen before by European eyes, but scenes so wonderful must have been gazed upon by angels in their flight.” 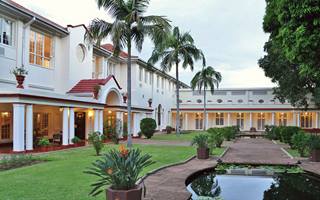