Melk Abbey originally was owned by the House of Babenbergs before being donated to the Benedictine monks in 1809. Rich in history and drama, Melk Abbey has survived substantial fires in 1297, an outbreak of the plague and a dreadful harvest which threatened closure of the Benedictine monastery.

Melk Abbey was resurrected through the tireless efforts of Abbot Berthold Dietmayr with his team of architects Joseph Munggenast and Jakob Prandtauer. Between 1702 -1736 they worked hard to build a sacred palace upon the medieval monastery foundations. Other craftsmen and artists involved in the restoration of Melk Abbey include Antonio Beduzzi, Johann Michael, Peter Widerin, Giuseppe Galli-Bibiena, Paul Troger and Lorenzo Mattielli. With the sarcophagus on the left side of the alter containing the skeleton of St. Colomon, the remains of St. Benedict are apparently in the sarcophagus to the right side of the alter.

No sightseeing tour of Europe or the town of Melk would be complete without a day trip and walking tour to Melk Abbey. With stunning apricot hues, the baroque style architecture of Melk Abbey is picture post-card perfect. With red marble pilasters, stucco marble walls and a breathtaking ceiling fresco resembling Greek mythology inside the Marble Hall, the Melk Abbey is a must-visit destination. Featuring a library with over 16,000 volumes the main hall has a stunning spiral staircase leading to 12 library rooms with over 100,000 volumes. With volumes spanning different languages including English, Latin and Hebrew and topics including medicine, history and law many all the books in Melk Abbey have historical and cultural significance. This significant monastic library is said to have been the inspiration for Italian writer Umberto Eco's "The Name of the Rose".

Rich in history Melk Abbey is today operating as a co-educational school with over 900 students enrolled.

Our 15-day all-inclusive 5-star luxury Danube river cruise from Budapest to Amsterdam is the best way to journey to Melk Abbey. Journeying through historic fortresses and ancient towns, your Scenic Space-Ship cruises along the Rhine River, Main River and Danube River. From Budapest, you'll experience the breathtaking opulence of Vienna's Palais Liechtenstein with a private Viennese evening concert as you enjoy a glass of fine Austrian Sekt.

The next stop on your all-inclusive 5-star Danube river cruise is at the small town of Durnstein in the Krems-Land district of Austria. This world-renowned wine-growing region in the Wachau Valley is rich in history and culture. First mentioned in the 11th century, Durnstein castle held Richard the Lionheart captive during the Third Crusade. Enjoy a bicycle tour of historic Durnstein or take a guided tour of the Melk Abbey, a magnificent 18th century Benedictine Abbey. Other destinations on your 5-star all-inclusive Danube Valley cruise include Salzburg, Regensburg, Nuremberg and the UNESCO World Heritage site, Marksburg Castle.

Gems of the Danube
Nuremberg to Budapest
Discover the historical wonders of Europe on a 8 day cruise from Budapest to Nuremberg. Enjoy ultimate luxury on an all-inclusive 5 star Scenic Space-Ship.
Offers Available
Fly from $1,595
Conditions apply
8 day
From (AUD)
$ 4,825
Discover

Jewels of Europe
Amsterdam to Budapest
Discover Europe's majestic waterways with an all-inclusive 15 day cruise along the Rhine, Main & Danube from wonderful Amsterdam to beautiful Budapest.
Offers Available
Flights Included inc taxes up to the value of $1,900
Conditions apply
15 day
From (AUD)
$ 6,995
Discover 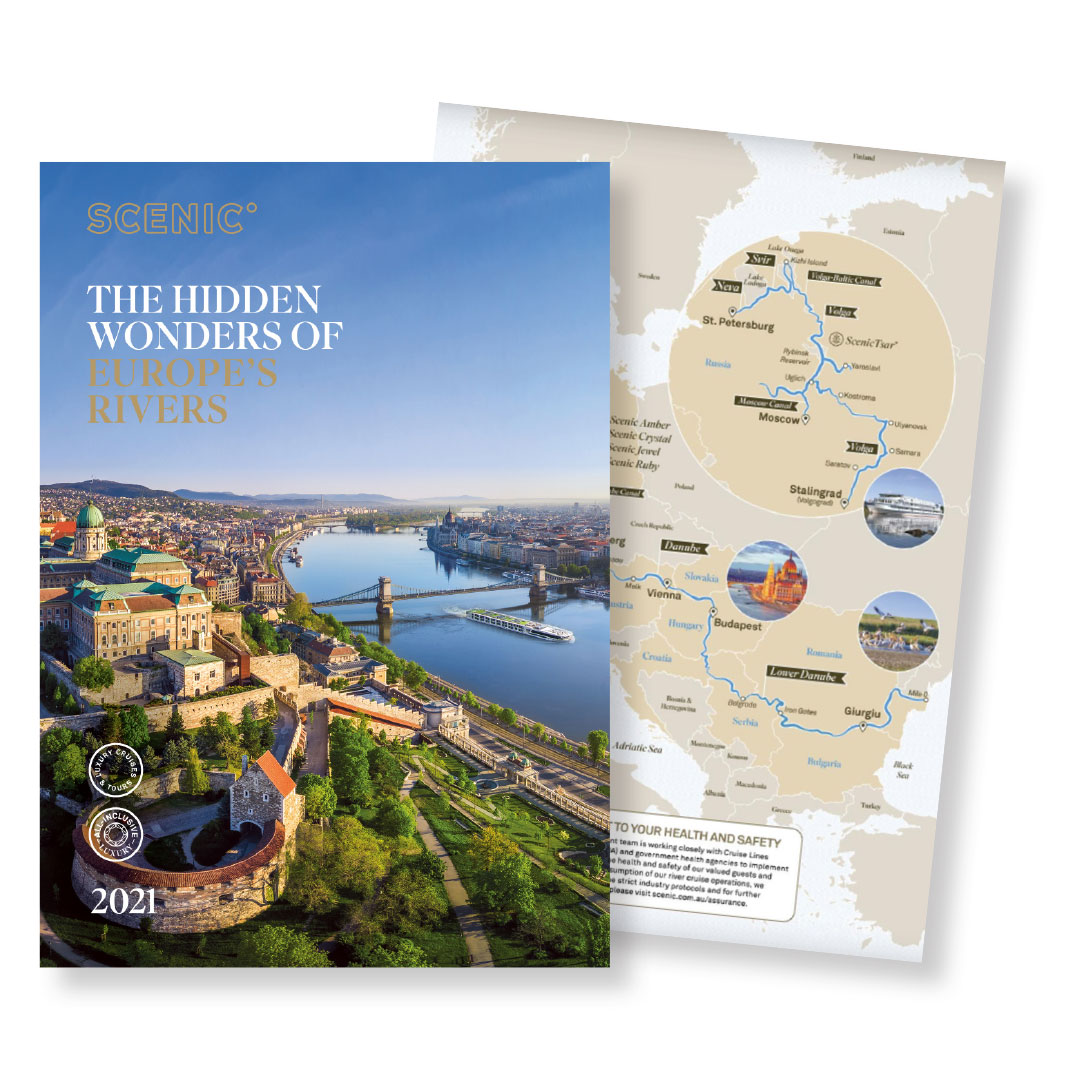 Top 6 Places to Visit in Austria

Positioned within Central Europe, Austria is rich in history and home to majestic mountains, quaint villages, traditional coffee houses and opulent palaces. Here are six must visit places to include on your itinerary.

Everyone loves a great schnitzel. When you find out how easy this favourite food is to make at home, you’ll love it even more. Why not try recreating the famous national dish in your kitchen?